My great great grandfather, Henry H. Speer, Jr., served in the 13th NJ Regiment, Co. K. This regiment was part of the 3rd Brigade, 1st Division, 12th Corps. Henry was mustered into service 25 August 1862 at Newark, NJ, Camp Frelinghuysen, by Capt. Hugh C. Irish (who was killed during the Battle of Antietam. Subsequent officers were Capt. James Scott who resigned, and then Capt. Charles A. Hopkins, as of 18 Jan. 1863.) This particular regiment was involved in many of the major battles of the Civil War including the Battle of Gettysburg. Henry's occupation when mustered into service was that of clerk.

According to Henry's discharge paper (copy in my possession), Henry was five feet seven inches, had gray eyes, brown hair and fair or sandy complexion.

He made his pension application based on the fact that he was in a lot of pain from a gunshot wound received in his right arm at the Battle of Chancellorsville, VA, and also because of his rheumatism. (Chancellorsville was the battle where General Stonewall Jackson was mortally wounded inadvertently by his own men.) Henry's wound landed him in the hospital at Aquia Creek, VA on 4 May 1863. It must not have been too severe a wound because he was back with his regiment on 8 May 1863, and he fought in the Battle of Gettysburg about 2 months later. 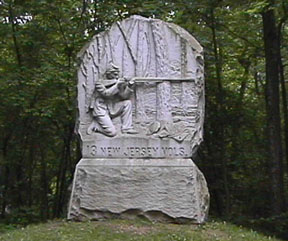 During the Civil War, Henry started as a private and was eventually promoted to first corporal. By the Sept./Oct. Company Muster Roll, however, after the Battle of Gettysburg, he was demoted to private again because of drunkenness. One can only assume that the horrors of war had begun to erode his spirit and the "bottle" was his recourse.

Henry was discharged the 8th day of June 1865 at Washington, DC. He returned to civilian life, to live in Paterson, NJ with his wife, Bertha Ower Speer, and children, Maria, Peter, Henry Jr., and after the War, Bertha, Emma, and Ida. He was listed in his pension application, then, as simply "laborer". His son, Henry Speer Jr. was my paternal great grandfather.

References:
Military and Pension Records of Henry H. Speer Jr. from the National Archives,
Washington, DC and information from Gettysburg National Park.
This website is provided courtesy of Ristenbatt Vacuum Cleaner Service, Inc.
Copyright © 1996-2015 Donna E. Ristenbatt All rights reserved.
The bevelled buttons at the bottom of this page were designed
and created by David E. Ristenbatt and are copyrighted.
This site may be freely linked to but not duplicated in any fashion without my written consent.