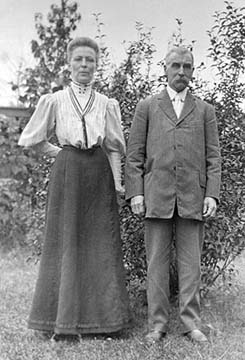 John B. Wright was left an orphan by the time he was 8 years old, his father dying before 1860 and his mother dying in 1860. (It is believed that the family moved to the Jerseyville, Illinois area around 1855, and that after Thomas's death, Mary moved back to Burlington County, New Jersey.) After his mother's death, John lived with his grandparents, John Butterfield and Nancy (Ann) Carter in New Hanover Township, Burlington County, New Jersey. Sometime after marrying Laura Ann Lamb, he moved to Paterson, New Jersey for a short while and then to Asbury Park, New Jersey, where he met his death in an unfortunate accident, by a fall from a roof. It is unknown whether he had some type of spell, thus causing this to happen.

Laura Ann Lamb was the daughter of Nehemiah Lamb and Mary Ann Worth. She was the eldest daughter of nine children, living as a young girl in Cookstown, Burlington County, New Jersey. Laura and John had 2 daughters, Mary Delores Wright, called Mae by everyone, and my grandmother, Emily Bird Wright. (Some day I would love to know how my grandmother got the middle name of Bird.) Laura Ann (Lamb) Wright died at the home of her youngest daughter, Emily Bird (Wright) Rogers, in 1922, in Haledon, Passaic County, New Jersey.