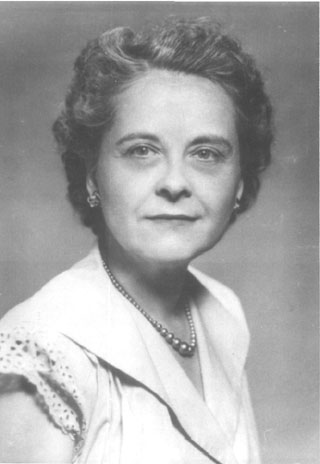 From an early age, my aunt showed an avid interest in music, and quite frankly, an avid interest in almost everything. Her enthusiasm knew no bounds - at times she reminded me of a little girl waiting to see what presents she had received on Christmas morning. She graduated from Newark State College in New Jersey in 1920, and in January 1920, she joined the faculty, to eventually become the chairman of the music department. She retired in June 1964. Until her mother passed away in 1959, she had spent her life up to that point living in Haledon, N.J. in the same house where she was born. After this, she came to live with my mother in Wyckoff, N.J., a widow as of 1958. In 1971, both she and my mother went to live with their sister, Grace, in Brewster, Cape Cod, Massachusetts. (Grace was a retired elementary school principal, who had had a house built in Brewster in 1963.) It was in Cape Cod, (Hyannis), that she passed away January 13, 1973, but is buried in Cedar Lawn Cemetery, Paterson, N.J.

Her interest in genealogy started as far as I know in the 1930s. Unfortunately, I wasn't born until 1945, and even as time passed and I grew older, I didn't share her interest. As many, I'm sure, have said, what a missed opportunity! Aunt Laura basically researched my mother's side of the family. Since there were no photocopy machines during this time period, she would laboriously type everything on the typewriter, inserting carbon paper for copies. In addition to this, she would make trips to the New Jersey State Library and Archives via train and bus, since she did not drive. Cemetery trips were often done with a friend or relative who could drive. Correspondence was also done via the typewriter. There have been so many times when I wish she were here right now, and I could show her all the new information I have discovered about our family and show her the computer and the photocopier! She would respond with her characteristic enthusiasm. She would also probably be shocked that I was the niece who got interested in genealogy!

In 1964, the Newark State College Yearbook was dedicated to her, and I feel it so aptly captures a description of my Aunt Laura. It said as follows:

"If these be our golden years then there is one who has endeavored to make them so. Her many years of faithful service to both her students and Newark State College are but a monument to her devotion and belief in the ideals and principles of the teaching profession. We all accept the idea that in order for the pupil to exhibit any enthusiasm for learning, the teacher herself must possess a genuine love for the interest in her subject; and this, Miss Laura E. Rogers has consistently demonstrated to all who have known her. Her influence has been a subtle one and, yet, one which will not end with us. For we would hope that the students we teach will come to know and appreciate the music she so skillfully and meaningfully introduced us to.

We, therefore, the class of 1964, humbly and sincerely dedicate this 1964 Memorabilia, to Laura E. Rogers."

Thus said, this home page is dedicated to the memory of Laura E. Rogers, who if she still lived, would probably be my most ardent supporter!