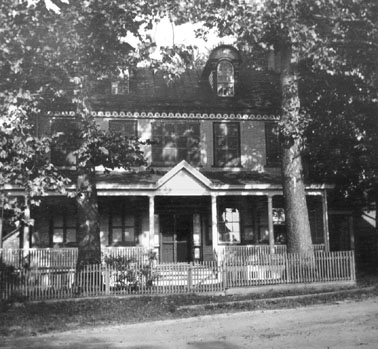 This is a photo of the Cookstown Tavern, circa 1906, as photographed by my grandparents, Samuel Rogers, and Emily Bird Wright.  They were visiting the Jacobstown and Cookstown, Burlington County, New Jersey area (Cookstown/Crosswicks Map [377KB, 150 dpi]) ** with other family members, among them my great grandmother, Laura A. (Lamb) Wright.  My great grandmother lived in this residence as a little girl, when her parents, Nehemiah Lamb and Mary Ann Worth owned this property.  Nehemiah bought this property on
11 February 1856 (See Deed transcription below) and sold the property on 24 March 1864 to Aaron Eldridge of Millstone Township, Monmouth County, New Jersey. (NJ State Archives Deeds, Burlington County Deeds, Reel #3641, Vol. A7, pp. 428-430)   Nehemiah bought this property for $2,500 and sold it for $3,000.  When he sold the property, it was referred to as "all that certain tavern property."  As one can see by the dates of ownership, the Inn/Tavern was occupied by my great great grandparents during the Civil War, and my great grandmother, Laura A. (Lamb) Wright shared stories with her grandchildren about Civil War soldiers coming to the Tavern during this time, at which time she would be sent upstairs, being somewhat fearful of these uniformed men on horseback.  Because Nehemiah was of Quaker background, one can only assume that he was no longer a practicing Quaker at this point, since he owned a tavern. (Nehemiah's first wife, Ann Patterson is buried in the Springfield Quaker Burying Grounds.)

**This is an 1876 map taken from the photostat negative collection of my late aunt, Laura E. Rogers, and is viewable online at almost 200%.  You may save it, thus being able to view it with Adobe Photoshop or some other image editor.  You will note the "Wid. Mary A. Lamb" on this map.  This is
Mary Ann (Worth) Lamb, widow of the Nehemiah Lamb who bought this Cookstown Tavern in 1856.  Nehemiah died in 1872, four years before the date of this map, and by 1880, Mary Ann had remarried Theodore Huster.

In the 1883 publication, History of Burlington and Mercer Counties by Woodward and Hageman, there is some brief history of the Cookstown area. This history mentions that "George C. Davis built a substantial Federal-style tavern/hotel in 1825, The Cookstown House.   In 1883, the town consisted of two stores, two hotels, a church, a blacksmith shop, a post office, a hay press, grist mill, a fertilizer and agricultural implement depot, and houses sheltering a population of about 150."

In 1975, the Burlington County Inventory and Survey of Historic, Architectural and Cultural Resources apparently used 1938 photos of this building (then Cox's Tavern), from the files of HABS's
(Historic American Buildings Survey) to determine in part, if this building qualified for the National Register of Historic Buildings. 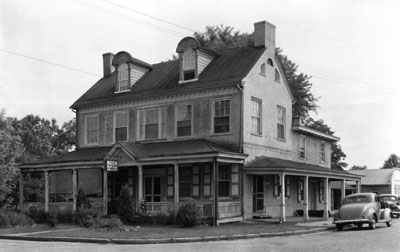 It was considered a possibility, but apparently nothing ever came of it, unfortunately, as the building was a grocery and deli in 1991. (About the only original part of the building left at that point was the basement, which my family and I were graciously shown, by the then current owners.)  According to the 1975 survey, the building's address was Main Street and Bunting Bridge Road, Cookstown, New Jersey.  The original building was a five-bay house, with two equal sized rooms on either side of the stairwell, the actual building measuring 20' x 40'.  For those interested in architecture, the survey also mentioned that there were classical motifs, including roundels in door frame, columns framing dormers, and fireplace mantels. The original building was described as a "carefully detailed, well-proportioned piece of Federal architecture."

Following is the transcription of the deed showing when Nehemiah Lamb bought this Tavern/Inn property. You are certainly able to use this deed for your personal research, but kindly source it "from whence it came." The transcription was done by me, and the source is Donna Speer Ristenbatt's web site, On the Trail of Our Ancestors. For the original source notation, you may write to me by e-mail.

Now this Indenture Witnesseth that the said Joseph Cliver and Sarah his wife and George Sykes parties of the first part for and in consideration of the sum of two thousand five hundred dollars lawful money of the United States to them in hand or ??? by the said Nehemiah Lamb at the ensealing and delivery hereof the ?? payment whereof is hereby owned and acknowledged ??? sold conveyed and confirmed and by these ??? (The lower right hand corner of this deed page has darkened and is difficult to read.) fully clearly and absolutely grant bargain sell and convey and confirm unto the said Nehemiah Lamb and to his heirs and assigns forever all the following described lot or parcel of land including the ? first and third lots herein before described and the principal part of the second lot situate in and near the village of Cookstown in the township of New Hanover in the County of Burlington and state of New Jersey and butted and bounded as follows.

Beginning at a stone at the Easterly edge of the main road or street running southerly through the village of Cookstown and at the Southerly edge of the road leading to Horners Bridge over Crosswicks Creek which stone is also the beginning and Northwest corner of William Pancoast's lot and is also the Beginning Corner to John B. Keeler's Mill property and farm or plantation which stone is distant twenty six links on a course North sixty four degrees and fifteen minutes West from the Northwest corner of the cellar wall under William Pancoast's dwelling house and also distant eighty four links on a course South thirty eight degrees and fifteen minutes West from the South west corner of the cellar ? under the Brick Farm house on the premises hereby conveyed and from said stone or Beginning running along the main road or street according to the magnetic position of the needle as the several courses around the premises were run by Joseph K. Hulme and George? Sykes in June Eighteen hundred and fifty two.

1st.  North one degree west two chains and Eighty one links to the South East corner the bridge where the said main road or street crosses the mill stream or creek a little Easterly from the Mill then 2nd) down the south? edge of the mill creek or brook which was formerly called North run or Tomlinsen's run the several courses thereof (as per deed by Charles Ivins and wife to George C. Davis aforesaid) the general course being North eighty one degrees and thirty minutes East four chains and two links to a stake or stone on the south side of said run or creek the Beginning Corner to lot conveyed by Joseph Hartshorne to George W. Ivins then along the southern edge of the creek. 3rd. North eighty nine degrees East three chains and forty links then still along the Southerly edge of the creek. 4th. South eighty two degrees and thirty minutes East four? chains and seventy five links then still along the southerly edge of the creek. 5th. North fifty one degrees East one chain and sixty seven links to the line of Thomas N. Emley and Henry Emley's land then leaving the creek and running along said Emley's line. 6th. ?-four degrees and fifteen minutes East two chains and two chains and twenty-? links to a stone on the slope of the bank then by land conveyed by Joseph Cliver and George Sykes to Thomas N. Emley and Henry Emley. 7th. South eleven degrees West four chains and forty links to a stone in the aforesaid road from near the bridge at Cookstown to Horner's Bridge on Crosswicks Creek and which stone is corner to said Emley's land then along said road. 8th. North seventy nine degrees west? eleven chains and thirty nine links to a stone in said road corner to Ezekiel Sexton's land it being also the beginning ? to the strip or gore of land the said Joseph Cliver and George Sykes purchased of Ezekiel Sexton their part by said Sexton's land and part by William Pancoast's land. 9th. South eighty seven degrees and forty five minutes West two chains and ninety two links to the beginning containing five acres and eighty six hundredths of an acre of land strict measure.

Together with all things thereunto appertaining or in anywise belonging as Vol. W-5 part or parcel of the same or reputed so to be and the reversions and remainders rents issues and profits thereof and all the estate, right, title, interest, property, possession, use, claim and demand whatsoever either in law or equity of them the said Joseph Cliver and Sarah his wife and George Sykesor either of them of in and to the same. To Have and to Hold the above described lot or parcel of land with the buildings and improvements, and appurtenances to the said Nehemiah Lamb his heirs and assigns to the only proper use, benefit, and behoof of the said Nehemiah Lamb his heirs and assigns forever.

This deed was taken and acknowledged before Daniel Lame, one of the Masters of the High Court of Chancery and recorded 5 March 1856.